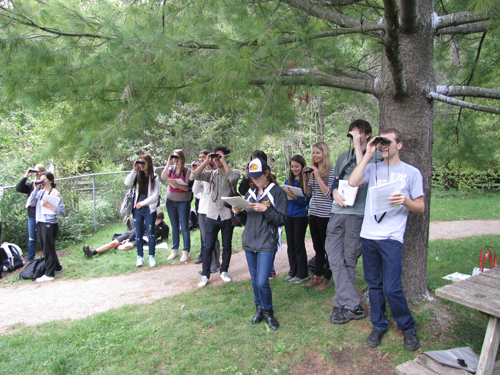 Students watch and count the feeder birds in the Gosling Wildlife Gardens.

From Joyce Buck, Teaching Support Instructor, Department of Integrative Biology: On September 19th and 20th, 2012, the BIOL2060 Ecology students (all 340 of them!) walked out to the birdfeeder near the J C Taylor Nature Center in the University of Guelph Arboretum. Armed with binoculars and using the methods developed for Project FeederWatch (Cornell Lab of Ornithology) each group of students recorded the maximum number of birds of each species they saw on the birdfeeders or in the nearby trees and shrubs during a 10-minute observation period. Here are our results for the greatest number of individuals per species observed by the students over the two days. 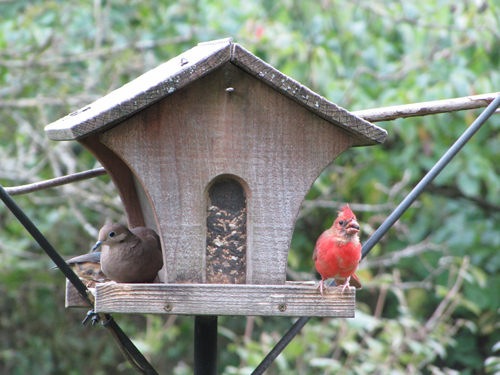 A Mourning Dove blocks our view of a Red-breasted Nuthatch while a rather ratty-looking Northern Cardinal opens a sunflower seed.

Of the sixteen species seen, the Black-capped Chickadees and Mourning Doves were the most abundant, while the Blue Jays were the noisiest visitors. At one point both the Downy and Hairy woodpeckers were at the feeder at the same time, clearly illustrating their differences in size to some of the novice birders. The most unusual sightings were of the American Redstart, Black-throated Blue Warbler, Cape May Warbler, Blue-headed Vireo, Red-eyed Vireo, and Ruby-crowned Kinglet; they aren’t typical bird feeder birds but were attracted to the lovely gardens! The most exciting moment was when a Sharp-shinned Hawk dive-bombed the birdfeeder after a chickadee, and swooped right in front of the two people who were there! Unfortunately the sighting occurred after the students had finished their observations, and it couldn’t be recorded in our results!

Thanks go to Chris Earley, the Arboretum’s Interpretive Biologist and Education Coordinator, for his enthusiasm and expert assistance! The students really enjoyed the field trip, and I am sure that a few will be pursuing a new hobby or furthering their education in field ecology and ornithology!