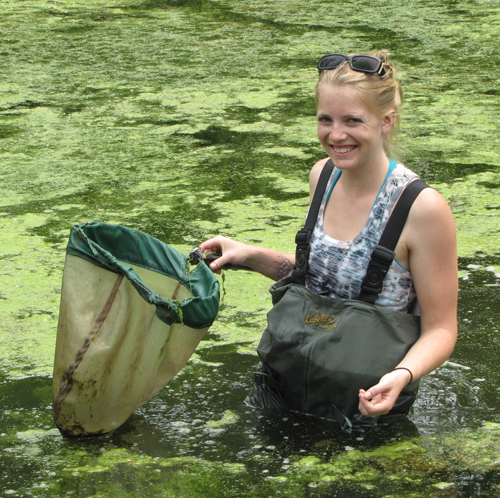 I research the effects of top predators on the distribution of odonate (dragonfly and damselfly) larvae in ponds in and around Guelph, ON, including within the Arboretum. Currently I am sampling well known ponds for larvae; some ponds have large fish (sunfish, bass, etc. ), others have smallfish (mudminnows, sticklbacks, etc. ), and others do not contain fish. The differences in the top predators is predicted to shape where larvae are able to survive. 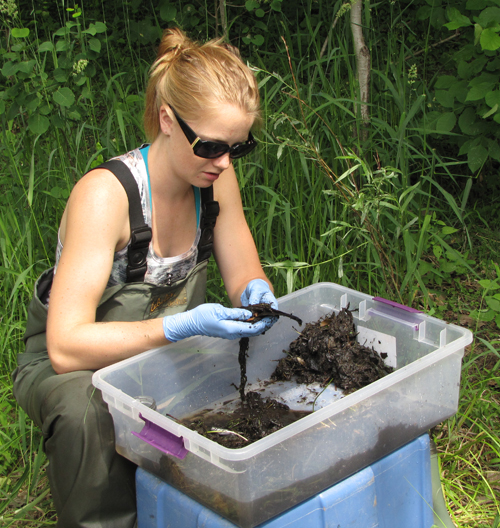 Mary sifting through her samples looking for the nymphs.

A second part of my research looks at the diets of larval dragonflies. Previous work on larval dragonfly diets, were unable to detect soft-bodied organisms such as worms. By using molecular techniques I will be able to more accurately determine the diets of larval dragonflies. Some live within the substrate/detritus while others live among the macrophytes and are more pelagic. The difference in microhabitat is predicted to render different diets. Secondly, the shape of the labium is predicted to cause differences in the diets – some are flat and rely on hooks, while others are spoon shaped and rely in interior hairs to capture prey. 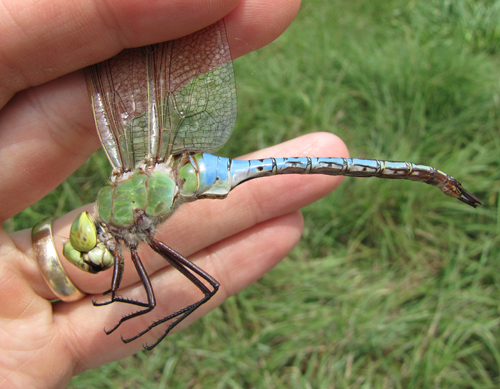 Common Green Darners are one of our biggest dragonfly species. Their large and conspicuous nymphs don't do well in ponds with fish because they get eaten.

A third portion of my work is to collect adult odonates and create a barcode library for species found in our area. Their sequences will be used to determine the larval distributions and whether cannibalism is as big of an occurrence as some literature has suggested.

My research is supervised by Dr. Beren Robinson and Dr. Mehrdad Hajibabaei in Integrative Biology.